2021-12-10
Trier-Luxembourg Airport (LUX)
The driver was polite, punctual and professional. We had a good journey and would recommend your company and the driver. Please pass on our thanks to the driver.
Punctuality: 5   Driver: 5   Vehicle: 5

2021-05-26
Luxembourg Airport (LUX)-Luxembourg city (all areas)
Hi, The driver was excellent! The car hardly carried all out luggage even though i notified you for the luggages i had and also as per your request i paid extra to have a bigger car as per your suggestion, but still we were forced to sit 2 grounups and one baby with car seat at the back and it was not comfortable. Also the car seat was not for a 3 months old baby as i requested. Overall very good service and i suggest to imprive a bit the above comments as i notified you well in advance to prepare. Thank you,
Punctuality: 5   Driver: 5   Vehicle: 4

2020-03-02
Luxembourg Airport (LUX)-Luxembourg city (all areas)
Excellent service, very happy with transfer. Would use the service again. Many thanks.
Punctuality: 5   Driver: 5   Vehicle: 5

Transfer from Luxembourg Airport to Saarbrücken 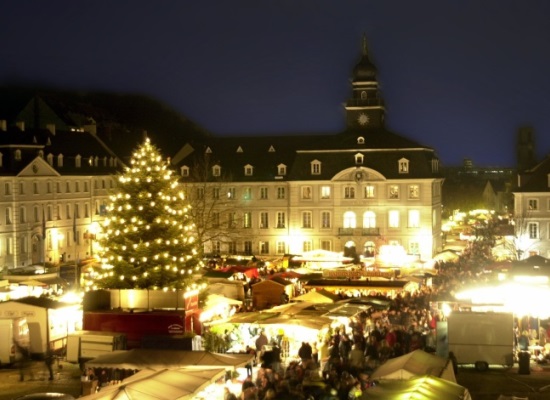 Saarbrucken is considered as the centre of the region known as Saar-Lor-Lux. This charming town has population of about 180.000 individuals. Considering the fact that it is near France, you can easily spot the influence that its neighboring country had on the city's architecture and overall aesthetics.

It is a border city well-known throughout historical periods. There is a university located amidst the beautiful deep woods near by the city that will captivate each person who passes by the road. This town has that typical French charm which is rare and unique, even for European cities nowadays. At this point, the city is evolving and growing from a small, mining town in the past to a brand, new European centre for modern research and technology.

If you really want to feel the spirit of the city, you should take a look around and see some of its most glorious architectural pieces. The St. Johann Basilica is one of them. Throughout the years, the basilica has been successfully kept in place and renovated, but it still serves as a well-known Baroque Basilica that was built in the 18th century. This church is also known as the "Basilica Minor".

Alte Brucke is the bridge that connects St. Johann and Alt-Saarbrucken. This bridge is a real symbol of the city. Originally, the bridge consisted of fourteen arches. Nowadays, only eight of those remain. Unfortunately, the bridge has been destroyed during the attacks while WWII. However, it was consequently rebuilt and therefore shortened back in the 60's in the 20th century.

Friedenskirche, also known as "Peace church" was constructed back in 1743 by Stengel. It is one of the most beautiful religious buildings in the area that is nowadays used by old Catholics and Russian and Greek Orthodox society.

There are a lot of major offices and companies located in this area these days that have their own headquarters in this town. In addition to all of this, the city can offer a wide and interesting cultural activities and a rich program containing diverse cultural events and festivals that attract a lot of people from all around the world. Back in 1909, Saarbrucken was a typical baroque city that merged with another nearby town - St. Johann, and the town Malstatt-Burbach. After the merging happened, Saarbrucken was revived to its own glory, so this city proudly celebrated its anniversary of 100 years back in 2009.